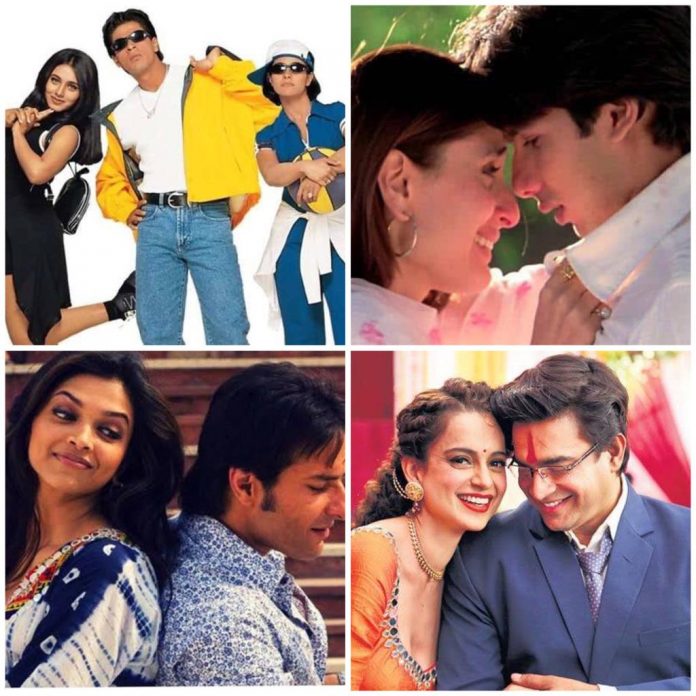 In a country where melodrama, suspense, and love stories are central to people’s lives, the supply of emotional and romantic content must be abundant. Without a question, Bollywood romantic movies have succeeded in entertaining us with emotional, cute, and touching content. Bollywood has filled our minds with fascinating romantic sequences that have helped us express love in the best imaginable way.

Although many romantic movies are there in Bollywood still DDLJ manages to remain as best and set the bar high for romance and romantic movies so high that very few movies have gone close to rivaling that magic in cinema. And, undoubtedly, the film was mind-blowing. Today TopTalky has combined a list of some best Bollywood romantic hits similar to this epic blockbuster.

This romcom was well-liked for actress Kareena Kapoor’s role of Geet, a classically feisty Punjabi girl who meets Aditya (Shahid Kapoor) at a station and manages to convince him to spend time with her family. firstly, Aditya was annoyed by her continuous talking, excitement, and positivity, but he ultimately falls in love with her.

An epic love story is shown in the film Veer-Zaara. A brave narrative about how borders cannot separate you from the person you love. Millions of people have been moved by Shah Rukh Khan and Preity Zinta’s on-screen romance. The plot revolves around two people who love each other too much that they gave up twenty years of their lives for one another.

The story revolves around Raj (Shahrukh Khan), a music teacher who rebels against the stringent standards of Narayan Shankar(Amitabh Bachchan). Moreover Raj’s efforts to support his students to achieve and comprehend the essence of love in their lives was remarkable. This romantic Bollywood movie presented love in its purest form.

The plot revolves around Naina (Priety Zinta), a shy and lonely girl, who falls in love with her annoying neighbor Aman (SRK). But Aman has his secret that he keeps hidden from all. Kal Ho Naa Ho has shown selflessness and the purity of pure love that cannot be expressed.

This is the story of Sameer Rossellini (Salman Khan), a half-Italian who belongs to a luxurious palace in India and falls for his professor’s daughter Nandini (Aishwarya Rai). Their love story takes up the first half of the film, however, the second half of the narrative is truly heartbreaking. Hum Dil De Chuke Sanam is one of the best romantic movies of all time.

Kabhi Khushi Kabhie Gham offers a little bit of all of it: comedy, drama, romance, and humor, all presented sincerely in true Hindi-film flavor. K3G shines from start to finish, running the mix of emotions and potentially leaving you in tears. It depicts the love story of two very different classes—rich and poor.

Kuch Kuch Hota Hai, a film based on the notion of friendship being love, tells the story of two college closest buddies who reconnect and fall madly in love after years of being apart. It’s the kind of film that you’ll not grow tired of seeing. The comedy is new, and the concept is unique, and you will undoubtedly enjoy the movie.

We all know that the world has changed, and so has the definition of love. We relate to this film because it wonderfully tells love stories from 2 distinct generations. It helped us comprehend how only the viewpoint of discovering one’s soulmate has changed with time, rather than the experience of love.

Some of us can certainly connect to R Madhavan’s portrayal of Manu in the film, as for him, Tanu’s joy was everything. He adored Tanu (Kangana Ranaut) so much that he volunteered to assist her in eloping with his lover, Raja. He continued to care for her quietly until Tanu discovered it on her own one day.

Devdas Mukherjee (ShahRukh Khan) is an affluent law graduate who comes from London to marry his school friend, Parvati “Paro” (Rai). However, his own family’s disapproval of their marriage begins his spiral into drunkenness, eventually leading to his emotional degradation and him seeking sanctuary with the golden-hearted harlot Chandramuk.