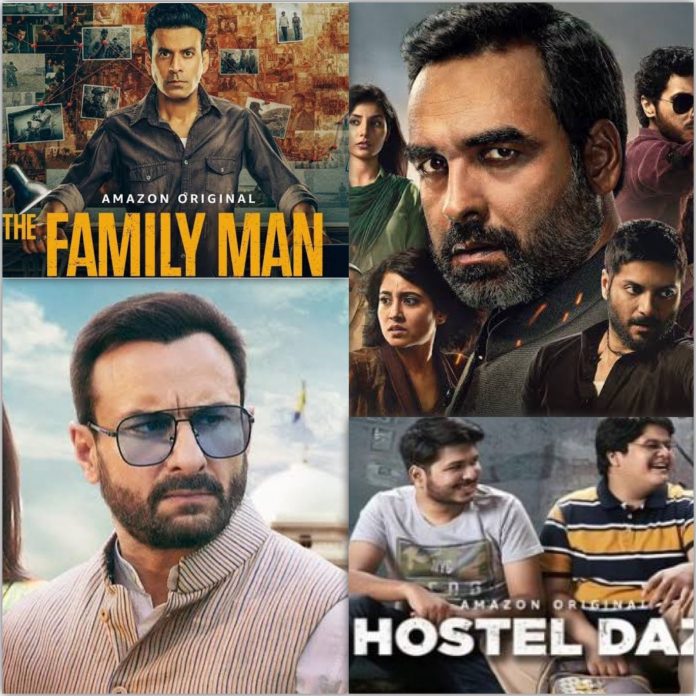 Amazon Prime Video is one of those streaming sites that contains a plethora of hidden treasures. Also, It has been a good year for the entertainment business worldwide, not just in India. We saw a lot of great work being produced in both independent and promotional, film blockbusters. The Indian entertainment industry is also doing well in this regard, particularly on OTT platforms. With the year already halfway through, let us take a closer look at some of the best Hindi web series now available on Amazon Prime Video that should be on your Wishlist.

The first season of Panchayat follows Abhishek Tripathi (Jitendra Kumar), who reluctantly accepted the position of Panchayat secretary in the midst of nowhere specifically, Phulera, a distant village in Ballia, Uttar Pradesh. The second season demonstrates how Abhishek, nicknamed Sachiv Ji, has adapted to his job in Phulera and has formed friendships with the people, particularly with the village’s previous Pradhan (Raghubir Yadav), his spouse.

The Family Man is an action-filled melodrama with light sprinkles of humor, led by star Srikant Tiwari’s (Manoj Bajpayee) on-screen portrayal. Srikant is a regular guy who works as an intelligence operative in a fictitious unit of the National Intelligence Agency. He hopes to apprehend militants who represent a threat to the nation’s peace with his fast decision and quick thinking. Srikant sets out to end the terror with his dynamic crew, attempting to keep one step ahead of the bad dudes. However, Srikant’s personal life is affected and influenced by his demanding service job, and how he tries

Paatal Lok is an Amazon Prime crime suspense thriller drama featuring Jaideep Ahlawat in the protagonist role. Paatal Lok is a show featuring Hathiram Chaudhary, a regular Delhi police official. He accidentally gets involved in a high-profile investigation, but as he learns more about it, he discovers many dark secrets of prominent individuals.

No list of best Hindi web series would be fair without a collegiate comedy, and Hostel Daze fits the bill nicely. The show is set in an engineering program where individuals from all backgrounds come around to express their lives, and it follows three close friends as they navigate the difficulties of college. The build-up of circumstances, the fury of the campus bully dwelling in a nearby house, and the abundance of college stories are likely to transport you back to your college days, down the path of memory. Hostel Daze is a simple, adorable jewel to enjoy when you miss those hallways and hostel gatherings a little too much.

Keeping up with the trend of female-centric entertainment and television, Four More Shots Please is an excellent attempt to highlight that women are lovely even with imperfections! D ( portrayed by Sayani Gupta), Umang ( portrayed by Bani J), Anjana (portrayed by Kirti Kulhari), and Siddhi (portrayed by Maanvi Gagroo) are mates who gather at Jeh’s (Prateik Babbar) bar regularly to talk life, their challenges, and love misadventures. The episodes are masterfully constructed to take you through the unique lives of these ladies as they struggle with everyday challenges from a variety of backgrounds. The inner battle that each of the characters experiences at various times throughout the show lends a serious feel to a previously hilarious episode.

Mirzapur is a popular action crime thriller web series that has captivated millions of people. This top-rated Hindi web drama on Amazon Prime Video is about a dominance struggle between two dynasties. One family is that of a wealthy carpet merchant named Akhandanand Tripathi, nicknamed Kaleen Bhaiya, who governs Mirzapur, while the other is that of a morally upright lawyer named Ramakant Pandit, whose two sons oppose Tripathi. An unfortunate incident between both families signals the founding of a dreadful path of hatred, greed, power, and so on. This renowned Hindi web series on Amazon Prime Videos has two seasons that will keep you captivated by the tv.

Another web series starring a well-known Indian stand-up comedian, the show stars Sumukhi Suresh as Pushpavalli. The plot continues when she befriends Nikhil (Manish Anand) at an occasion and things begin to take off from there. Though the two appear to get together, only Pushpavalli falls in love with the boy and begins a hidden, spooky trail of following him. Watch Pushpavalli’s quest for her one-sided love in this fairly dark comic. The ordinary life scenes from Bangalore, the side personalities, and Sumukhi Suresh’s on-screen premiere should be sufficient to put it on your playlist.

Read More: 10 Lesser-Known Indian Web Series of All Time That You Need to Watch